I recently had the opportunity to participate in a symposium at the Johns Hopkins University Applied Physics Lab that highlighted the benefits that a new high-speed broadband network will bring to schools, libraries, healthcare institutions, public safety facilities and other community “anchors” across the state of Maryland.

Thanks to the Recovery Act, the Maryland Department of Information Technology is overseeing a $115 million grant from NTIA’s Broadband Technology Opportunities Program to build a statewide network that plans to deliver affordable broadband to every one of Maryland’s 24 counties and connect more than 1,000 anchor institutions.

The project – called the One Maryland Broadband Network – is putting down nearly 1,300 miles of new fiber and linking more than 2,400 miles of existing fiber. It will extend and connect three separate systems: the state-run networkMaryland, which was established for public sector use; the nine-jurisdiction Inter-County Broadband Network, which connects government buildings and other anchors across Central Maryland; and a non-profit consortium of rural carriers called Maryland Broadband Cooperative.

When it’s done in late 2013, the One Maryland Broadband Network will supply core infrastructure that local carriers can use to deploy broadband to almost 2 million homes and more than 400,000 businesses, including those in 15 rural counties in Western and Southern Maryland and on the state’s Eastern Shore. The new network will also deliver connections of up to 10 gigabits per second to anchor institutions.

Already, the One Maryland Broadband Network has installed more than 179 miles of fiber and 332 miles of conduit, and connected 10 anchors. Among the buildings hooked up so far are two fire stations in Baltimore, an elementary school in Anne Arundel County, the police department and town hall in Sykesville and the State Police Barracks in La Plata. At the Police Barracks, the new network makes it possible for officers to download training videos in just seconds, quickly access criminal databases for background checks and monitor traffic cameras in real time.

Another institution being linked to the One Maryland Broadband Network is the Johns Hopkins Applied Physics Lab in Laurel, Md., which hosted last week’s symposium. The Inter-County Broadband Network organized the workshop to educate anchor institutions about what the new network will mean for them.

For the Applied Physics Lab, being part of the One Maryland Broadband Network will give it access to virtually unlimited bandwidth to share resources with federal agencies interconnected to the system and with educational institutions on the network. Officials with the Inter-County Broadband Network say the lab could use dedicated high-speed links to access high-resolution telescopes through NASA’s Goddard Space Flight Center, for instance. Or it could use distance-learning video systems to pipe instructional material on rocket science into high school classrooms around the state.

Project officials expect to have 233 anchor institutions connected by the summer. The One Maryland Broadband Network is also producing jobs. The project says it has already created at least 694 jobs in construction, engineering and project management.

It is gratifying to watch the network take shape. To steal a phrase from Senator Barbara Mikulski – who also participated in last week’s workshop and has been a champion of the Recovery Act and the One Maryland Broadband Network - Maryland is benefitting from a “high-fiber diet.” And when the project is complete, a cutting-edge telecommunications backbone will bring the benefits of broadband to every corner of the state. 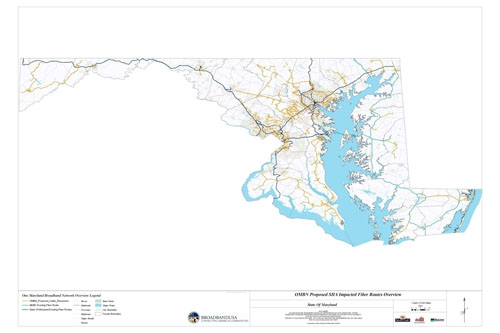 The One Maryland Broadband Network is putting down nearly 1,300 miles of new fiber and linking more than 2,400 miles of existing fiber to build a cutting-edge telecommunications backbone that will bring broadband to every one of Maryland’s 24 counties and connect more than 1,000 anchor institutions.