NTIA’s Institute for Telecommunication Sciences (ITS) is hard at work in our Boulder, Colorado labs testing next-generation technology that will be used in a new nationwide public safety broadband network to be built by the First Responder Network Authority (FirstNet).

Congress directed that the new FirstNet public safety network utilize Long Term Evolution (LTE) radio technology, a developing commercial network standard for broadband transmission. The public safety community identified LTE as the most promising technology to satisfy its growing need for advanced communications capabilities. As a result, ITS is exploring Voice over LTE(VoLTE), a digital protocol under which the network handles voice as just another form of data, over LTE networks. ITS is working with the public safety community to ensure that mission-critical voice transmission using this new technology is at least as clear to practitioners in field conditions as current technologies.

When the first digital Land Mobile Radios (LMR) appeared in the public safety market, firefighters reported that some of the unique environmental conditions associated with firefighting appeared to be problematic for digital LMR.  ITS joined with other government agencies, the public safety community, and industry to resolve these issues through extensive laboratory research and testing with the direct involvement of practitioners and manufacturers. In anticipation of the move to public safety broadband, ITS several years ago began planning, designing, conducting, and analyzing tests to assess the intelligibility of voice communication over VoLTE in field conditions. 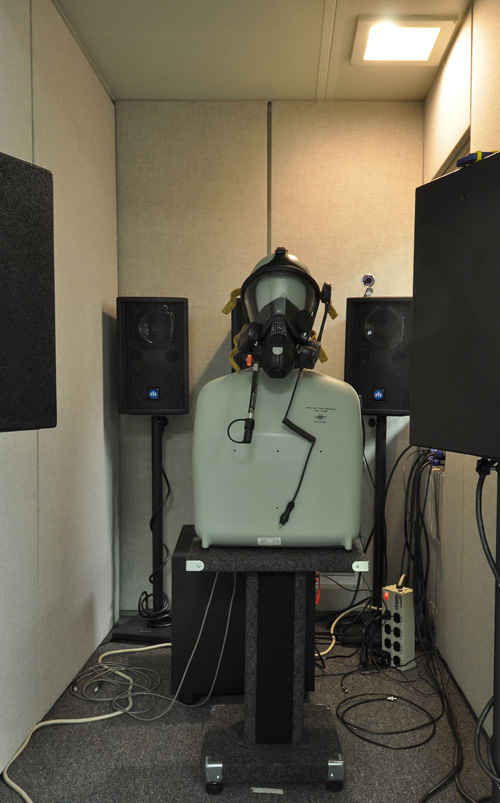 A head and torso simulator (HATS) is set up in a sound isolation booth and used to prepare sound clips for subjective testing.

NTIA Technical Report 13-493, “Intelligibility of the Adaptive Multi-Rate Speech Coder in Emergency-Response Environments,” recently released by ITS, describes laboratory tests that compared speech intelligibility over two types of VoLTE technologies with speech intelligibility over both legacy analog radios and digital LMRs. The report analyzes the results and concludes that, in some operating environments, the new technology offers clearer voice communication than currently used existing systems. A panel of 15 public safety practitioners from 14 agencies and jurisdictions tested VoLTE transmissions under seven different simulated field conditions. Five companies loaned equipment or provided support for equipment used in this and related work. In only one of 14 cases was VoLTE intelligibility lower than that of current standard equipment.

The work described in this report was carried out in the Public Safety Communications Research (PSCR) laboratories at ITS. PSCR is a collaborative inter-agency project sponsored by the Department of Homeland Security Office of Interoperability and Compatibility and the National Institute of Standards and Technology Office of Law Enforcement Standards.