The State of the Urban/Rural Digital Divide

August 10, 2016 by By Edward Carlson, Policy Analyst, and by Justin Goss, Intern, Office of Policy Analysis and Development

While 75 percent of Americans reported using the Internet in July 2015, the longstanding disparity between urban and rural users persists and has emerged in the adoption of new technologies such as the smartphone and social media, according to the latest computer and Internet use data collected for NTIA. This suggests that in spite of advances in both policy and technology, the barriers to Internet adoption existing in rural communities are complex and stubborn. In particular, Americans who were otherwise less likely to use the Internet—such as those with lower levels of family income or education—faced an even larger disadvantage when living in a rural area. Conversely, rural individuals with higher levels of education or family income did not have significantly lower adoption rates than their urban counterparts, according to the data. The data comes from NTIA’s Computer and Internet Use Supplement to the Census Bureau’s Current Population Survey.

View of the Rural Divide

Figure 1: Internet Use from Any Location by Population Density
Percent of Americans Ages 3+, 1998-2015 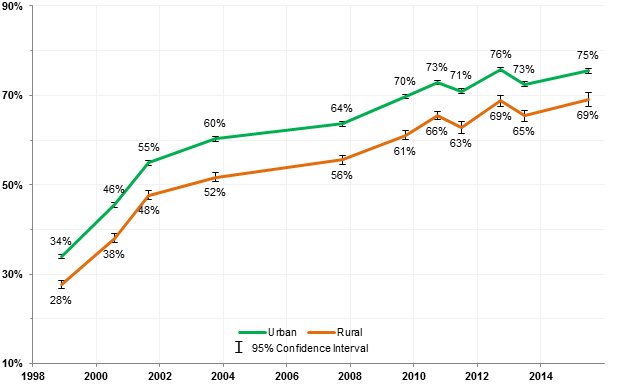 While the digital divide appears to be closing for some demographic communities, the gap between rural and urban populations has remained remarkably consistent for at least as long as NTIA has been gathering data on Internet use. In 1998, 28 percent of Americans living in rural areas used the Internet, compared to 34 percent of those in urban areas. Even as Internet use increased dramatically overall, a rural/urban gap remained in 2015, with 69 percent of rural residents reporting using the Internet, versus 75 percent of urban residents. This data indicates a fairly constant 6-9 percentage point gap between rural and urban communities’ Internet use over time.

Figure 2: Internet Use by Race or Ethnicity and Population Density,
Percent of Americans Ages 3+, 2015 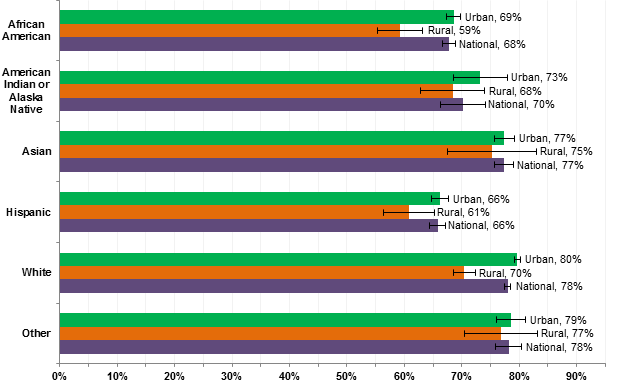 Figure 3: Internet Use by Family Income and Population Density,
Percent of Americans Ages 3+, 2015 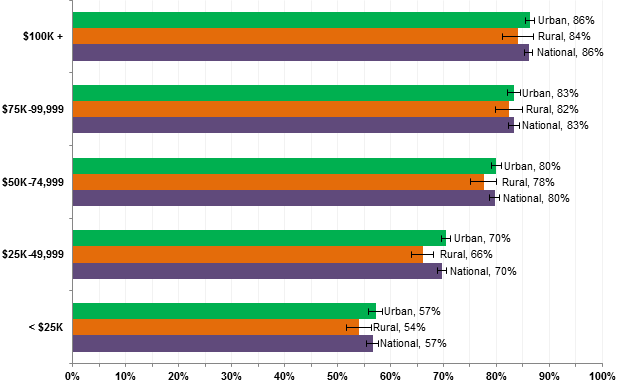 Figure 4: Internet Use by Educational Attainment and Population Density,
Percent of Americans Ages 3+, 2015 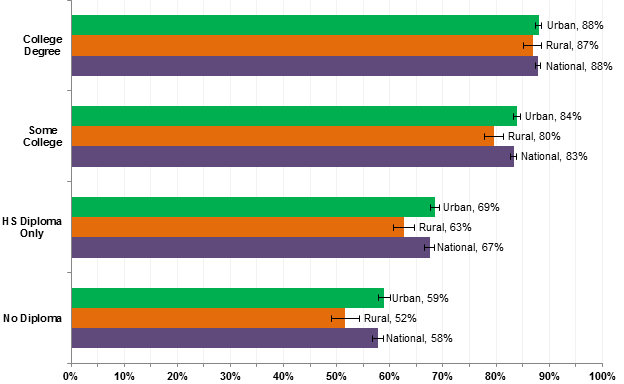 People with lower levels of educational attainment were even more likely to find themselves on the wrong side of the digital divide when living in a rural area. Our analysis reveals that the digital divide was greatest between rural and urban users without a high school diploma. Only 52 percent of those who lack a high school diploma and live in a rural area reported using the Internet, compared with 59 percent of those who live in urban households with a similar level of education. The gap was a little smaller for high school graduates, where 63 percent of rural residents reported Internet use compared with 69 percent of urban residents and 67 percent of all Americans. Eighty-eight percent of Americans with a college degree used the Internet nationally, with rural and urban college graduates adopting at approximately the same rate.

Living in a rural area was also associated with lower levels of device use, Internet use at particular locations, and participation in online activities. Overall, we found rural users were less likely than their urban counterparts to report using a desktop (29 percent for rural users to 35 percent for urban users), a laptop (39 percent to 48 percent), a tablet (24 percent to 30 percent), or an Internet-enabled mobile phone (45 percent to 54 percent). Rural residents were also less likely to use the Internet from home (61 percent to 69 percent) and at work (22 percent to 29 percent). In terms of online services and functions, rural residents who indicated they did use the Internet were still less likely than urban residents to use email (86 percent to 92 percent), social media (68 percent to 71 percent), and online video or voice conferencing (28 percent to 38 percent) than Internet users in urban areas. While some of these differences may seem relatively modest, they are statistically significant. Lastly, rural individuals were more likely than their urban counterparts not to own any Internet compatible devices (33 percent to 26 percent), and were less likely to own more than one device.

Based on these results, it appears there is a continuing need to address the obstacles rural residents face in Internet use. For instance, some households may require subsidies to make the Internet more affordable, while others may need digital literacy training to make the Internet more useful to them. Even today, some remote rural communities still lack Internet access at all or the service available may be poor or prohibitively expensive.