The security and privacy landscape has continued to evolve since NTIA first asked about it in our 2015 Internet Use Survey. High-profile data breaches and debates about the role of technology in people’s lives have kept concerns about privacy and security in the forefront. The spread of emerging technologies such as smart home devices and always-on voice assistants, as well as business models predicated on the collection, use, and sale of personal information, means these concerns have taken on increased urgency.

As NTIA will be exploring in our listening sessions this week, these concerns are especially acute for those in marginalized or underserved communities. These communities can sometimes face higher risks of harm from the loss of privacy or misuse of data.

In 2019, most Internet-using households in America expressed concerns regarding digital privacy, according to data from the NTIA Internet Use Survey. While fewer households had concerns about digital privacy and security and deterred online activities in 2015 vs. 2017, rates have held steady from 2017 to 2019. In 2019, 73 percent of Internet-using households in 2019 had significant concerns about online privacy and security risks, and 35 percent said such worries led them to hold back from some online activities (see Figure 1). 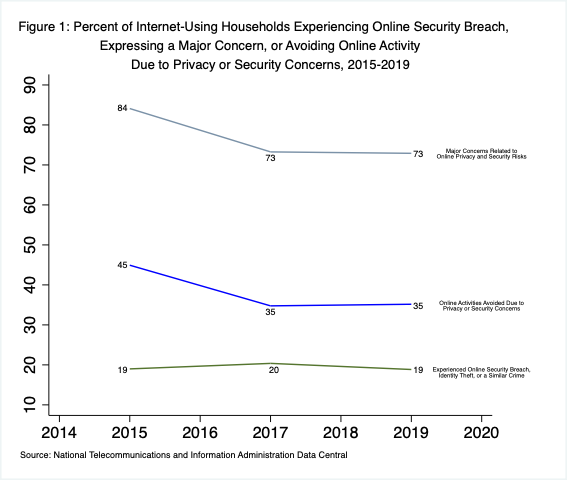 Overall, about 19 percent of Internet-using households experienced an online security breach, identity theft, or similar crime in 2019, a rate that has remained relatively steady since 2015. Reports of security breaches became more common as the range of computing devices used in a household increased, the data showed. Households reporting security breaches were also generally more common among those higher annual family incomes.

Concerns Regarding Identity Theft Have Declined

Although most categories of privacy and security concerns have either increased modestly or remained stable, the percentage of online households worried about identity theft and credit card or banking fraud declined over the four-year period (see Figure 4). There was a 9 percentage point decrease in the proportion of those households that named identity theft as a major concern from 2015 to 2019. This downward trend may be surprising given that the number of identity theft reports climbed from about 490,000 in 2015 to over 1.3 million reports in 2020, according to the Federal Trade Commission (FTC) Consumer Sentinel Network. Despite this surge, fewer Internet-using households considered identity theft a major concern in 2019. 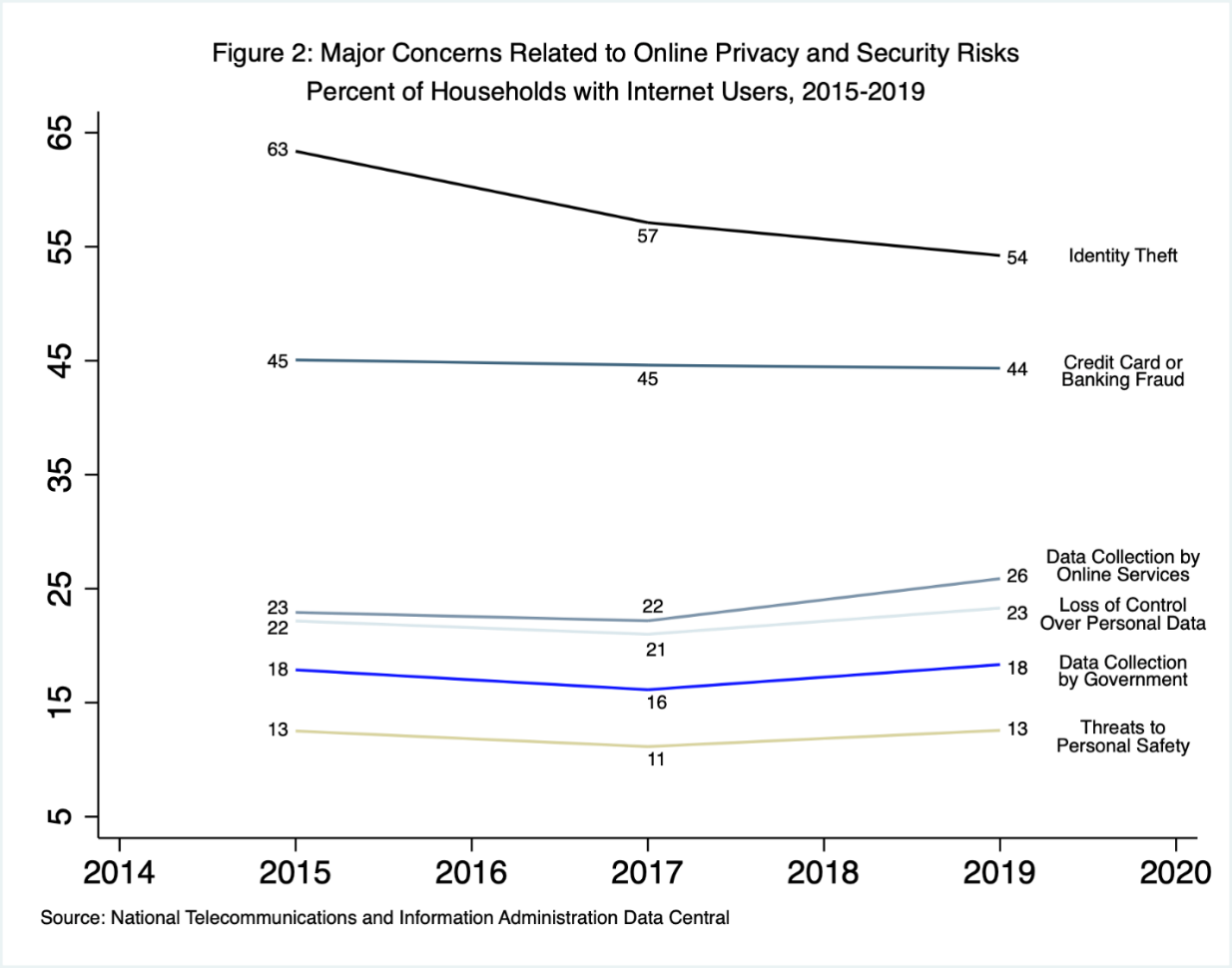 In contrast, concerns about data collection by online services grew from 23 percent of online households in 2015 to 26 percent in 2019.

These digital privacy and security concerns also deterred millions of Americans from engaging in online activities at some point during the past year (see Figure 5). Although fewer households refrained from conducting financial transactions online – decreasing 6 percentage points over the course of four years – we found small increases in Internet-using households avoiding buying goods or services online, posting on social networks, and expressing a controversial opinion online between 2017 and 2019 following significant declines from 2015. 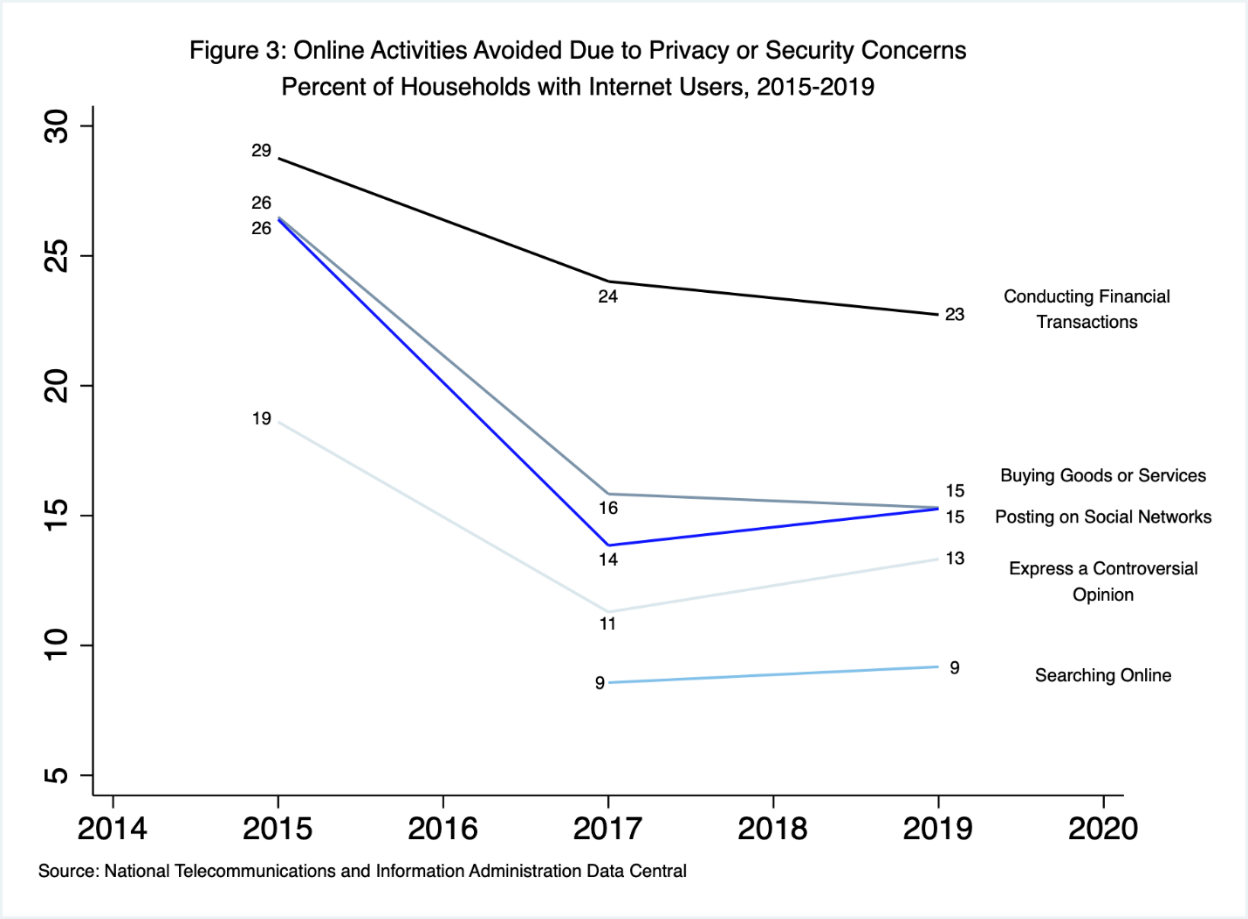 The most recent survey data show that Americans are concerned about their privacy and security, especially when it comes to their personal data. The explosion of the marketplace for Internet-based services and applications, as well as Americans’ growing engagement online, means it is more important than ever for policymakers to understand the digital landscape, to encourage the widespread deployment of encryption and other technologies to protect users, and to address structural disparities that persist in the digital economy.

This past month, the 2021 NTIA Internet Use Survey went into the field. We look forward to analyzing these results when they become available next year, as we continue our efforts to inform policies that build trust, confidence, and resilience among Internet users.

NTIA has now sponsored its Internet Use Survey 16 times since 1994, using the results for data-driven policy analysis and development. With its large sample size and more than 50 questions about Internet usage, it is the most comprehensive national survey of how Americans connect to the Internet and what they do when they’re online. The Census Bureau administers the NTIA Internet Use Survey as a supplement to its Current Population Survey (CPS) and includes over 114,000 people living in nearly 50,000 households across all 50 states and the District of Columbia.