NTIA today is announcing the development of another tool to help meet the surging demand for spectrum from industry and government agencies.  It also is the latest demonstration of the Obama Administration’s ongoing commitment to make spectrum available for wireless broadband.

As directed by President Obama in a 2013 Memorandum, NTIA is releasing the Quantitative Assessments of Spectrum Usage that summarizes our initial efforts to evaluate a range of federal spectrum bands for possible sharing with commercial users.  These efforts will provide a basis for further detailed studies of potential sharing scenarios.

NTIA worked with the federal agencies utilizing 960 megahertz of spectrum in the 1300-1390 MHz, 1675-1695 MHz, 2700-2900 MHz, 2900-3100 MHz, and 3100-3550 MHz bands.  These agencies supplied or verified information regarding the characteristics of the systems utilizing these frequencies, with parameters for spectrum utilized (frequency and bandwidth), geographic area, and estimated time of usage.  From this data, NTIA was able to derive a cumulative key metric, Total Spectrum Usage, which represents an overall approximation of the extent to which each system uses its assigned spectrum.  The cumulative total of each agency’s use within a range of frequencies then serves as the quantitative assessment for the particular band.  In bands and locations where multiple agencies have systems, we aggregated the data as prescribed by the 2013 Memorandum.

The report provides the first results of the analyses for these bands and, for each, looks at whether frequency, geographic or temporal sharing opportunities appear promising for further study.  Frequency sharing refers to utilization of non-overlapping segments within a band without geographic or time constraints.  The report indicates that five of the seven bands, or sub-bands in two instances, could be suitable for sharing on a geographic basis in certain parts of the country or at certain times of the day when they are not in use by federal agencies. For example, today’s report finds that the 3100-3550 MHz band could be examined more closely to determine if it can be used by commercial providers, while the 1675-1695 MHz band could also be examined to see whether it could be made available for shared use but only in certain geographic areas.

The findings from this report are one consideration in deciding whether to further study a particular band.  From this, any such further detailed evaluations would need to take into account all current and future federal activities in a band as well as technical, operational, and cost considerations

A multi-agency initiative is underway exploring the feasibility of making changes to the Federal Aviation Administration’s long-range radars operating in the 1300-1350 MHz sub-band that could include relocating them to another band.  While it is too early in the process to reach conclusions, relocation of these radars from the band would likely significantly improve the potential for sharing.  In fact, the federal agencies involved in the initiative are proposing to utilize funds from the Spectrum Relocation Fund to study this possibility consistent with the Spectrum Pipeline Act of 2015. The analysis (as shown in Figure 1) detailed in the report found that the 1300-1350 MHz sub-band currently would not be a candidate for further study of any of the sharing approaches because of the unacceptable risks of harmful interference to the FAA’s aeronautical long-range radars currently operating in the band that support air traffic control and other safety-of-life applications.  However, as figure 2 shows, moving the FAA radars could open up potential sharing opportunities in the future. 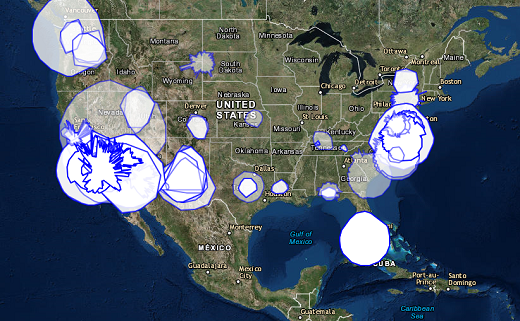 We are very excited about the new internal software tool NTIA developed to help perform the analysis in the report that greatly improves our ability to understand spectrum utilization associated with federal frequency assignments.  A key functionality is depicting visualizations of geographic usage of the assignments, as demonstrated by the example contours in the figures above.  This new capability already is helping in our efforts to assess spectrum usage, including as part of our repurposing initiatives.

Going forward, NTIA also plans to develop a framework for incorporating the quantitative assessment processes into the regular reviews of agency frequency assignments. Meanwhile, NTIA’s Office of Spectrum Management and the Institute for Telecommunication Sciences, NTIA’s research lab in Boulder, Colorado, will explore advanced spectrum monitoring capabilities that can be used to validate and supplement the results of the quantitative assessments.

The release of this report today is an important milestone in our activities aimed at continuing to improve how NTIA manages scarce radio spectrum resources as demand increases from all sides.  The results of the quantitative assessments will help NTIA, in consultation with the agencies, determine the extent to which any of these frequency bands should be further evaluated for sharing with commercial users, particularly in major metropolitan areas.

In the coming months, we intend to incorporate such determinations into our ongoing collaborative efforts to make additional spectrum sharing opportunities a reality.  Additionally, we intend to sustain and work to improve the quantitative assessment process, including the associated software tool, expecting it to pay dividends well into the future across many of our spectrum management responsibilities.