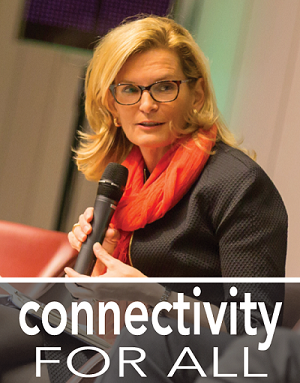 For more than 100 years, March 8 has been celebrated as International Women’s Day, honoring the achievements of women and advocating for greater gender parity.

While women have made great progress in the past century, from the voting booth to the boardroom, there are still many institutions that haven’t kept pace. For example, in its 153-year history, the International Telecommunication Union (ITU) has never elected a woman for any of its five elected leadership roles.

This year, the voting members of the ITU have a chance to take a significant step forward by electing Doreen Bogdan-Martin as Director of the ITU Telecommunication Development Bureau, or D-Sector. Bogdan-Martin is an ITU veteran and former NTIA official who will bring dynamic leadership to this important body.

The ITU, originally founded to coordinate telegraph signals, is responsible for assigning global spectrum and satellite orbits, which are key functions for U.S. space and national security policy. The ITU also promotes access to technology and develops technical interconnection standards.

Space policy is a key priority for U.S. Secretary of Commerce Wilbur Ross, who is leading an effort to reinvigorate the United States’ leadership in space research and technological advancements, and ensure that the regulatory system is adaptive to the private sector’s extraordinary rate of innovation. That’s why the Department of Commerce is strongly backing the candidacy of Bogdan-Martin, an experienced and judicious American who is an ideal fit to lead the ITU’s D-sector.

The D-Sector works to bring telecommunications and information technology to the developing world. In her work at the ITU, Bogdan-Martin has shown a unique ability to lead transformative programs, attract private investment, and bring together the right people and organizations to address the digital divide. As the head of the D-Sector, she plans to increase global connectivity, strengthen partnerships, improve resource mobilization, and encourage digital inclusion and skill development.

Since 2008, Bogdan-Martin has been chief of the ITU’s Strategic Planning and Membership Department. She is the most senior-ranked woman at the ITU, and her track record includes coordinating the UN Broadband Commission and launching EQUALS, the ITU’s new gender empowerment initiative.

The ITU’s leadership elections are held every four years at a Plenipotentiary Conference. The next conference is scheduled for October 2018 in Dubai. The United States invites all countries to join our support for Doreen Bogdan-Martin, a leader whose vision and drive match the enormous challenges the world will face over the next four years.