More than Half of American Households Used the Internet for Health-Related Activities in 2019, NTIA Data Show

Telemedicine and telehealth-related activities are on the rise, according to NTIA’s November 2019 Internet Use Survey, which found that more households are using the Internet to communicate with health professionals, access health records, and research health information.

Because the survey was conducted prior to the outbreak of COVID-19, it provides an important baseline for understanding the prevalence of telehealth usage among American households and the importance of Internet access for essential services. 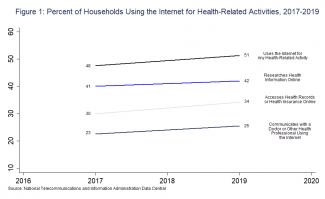 Our data reveal that telehealth and telemedicine users tend to have higher incomes, more education, and live in metropolitan areas. An Internet-using household in which the reference person lacked a high school diploma was half as likely as one with some college experience to research health information, such as with WebMD or similar services. The reference person is the first individual in each household who is identified as owning or renting the housing unit.

On average, Internet-using households with reference persons that were 65 years of age or older tended to use the Internet less to access health records and research health information compared to those between the ages of 25 to 64. However, compared to all other age brackets, those 65 or older had the highest adoption rate of electronic health monitoring services, which collect and send data to health care providers through the Internet, including connected devices that monitor vital statistics. 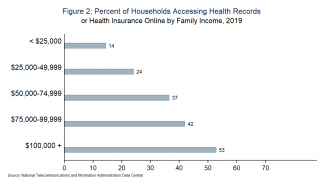 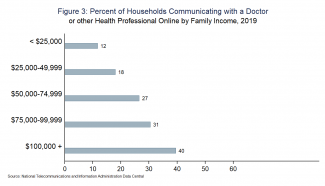 Further, at every income bracket, women were slightly more likely to use the Internet to access health or health insurance records online compared to men. According to the data, this was also true for the other telehealth measures asked about in the NTIA Internet Use Survey.

The proportion of households in urban areas that accessed health or health insurance records using the Internet grew by four percentage points from 2017 to 2019, while for those in rural areas, it grew by six percentage points in the same period. The 10-point gap between urban and rural households (see Figure 4) can mostly be explained by lower rates of Internet use in non-metropolitan areas, as discussed in a previous NTIA analysis on the urban/rural digital divide. 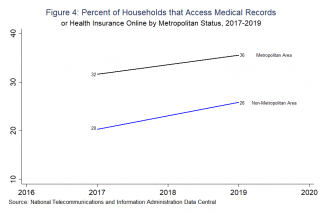 Comparing the rates of telehealth usage among different racial or ethnic groups showed substantial growth for Hispanic and American Indian/Alaska Native households from 2017 to 2019 (see Figure 5). While overall usage increased for all racial groups, there are still large disparities between groups that are consistent with results from the most recent NTIA analysis of shifts in technology use. 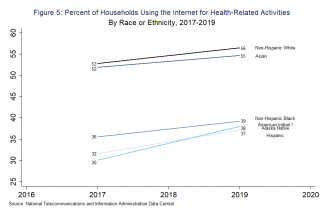 Comparing data from the next survey to what we see here, especially with increased measures for working from home and growth of e-health services, should lead to useful data for identifying adaptations in usage during the pandemic. NTIA will continue to analyze these trends and research how different populations are impacted by the rise in telehealth.