This summer, NTIA reported initial results from our latest NTIA Internet Use Survey, which showed that Americans were increasingly using a larger and more varied range of devices. But with dozens of topics covered in the survey, there is a lot more we can learn from this data collection, including questions about online activities such as checking email, watching videos and participating in the sharing economy.

Two online activities of particular importance right now are remote work and taking online classes. Our data show that approximately 51 million Americans reported using the Internet to work remotely in 2019, nearly a third of the estimated 160 million Americans who were employed in November. A smaller number, about 43 million Americans, said they used the Internet to take classes or complete job training last year. That represents about 20 percent of Internet users ages 15 or older.

Although our survey was conducted in November 2019, a few months before the outbreak of the coronavirus, the results can be helpful to understanding the extent to which Americans were prepared to work and learn online.

As with many other online activities, there are significant disparities in the prevalence of teleworking via the Internet among particular demographic groups. For example, while 34 percent of White non-Hispanic employees and 38 percent of Asian American employees teleworked in 2019, only 26 percent of African American and 22 percent of Hispanic employees reported doing so. Part of this gap is due to lower rates of Internet use among African American and Hispanic employees, but Internet users in these groups were also less likely to telework (see Figure 1). Even when looking at those Americans who were both employed and using the Internet in some fashion, we still see significant racial disparities in rates of telework, consistent with previous NTIA analysis of online activities. 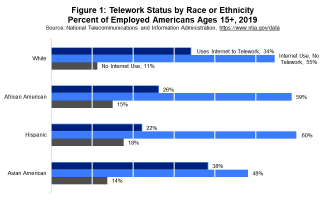 Gaps in telework were also evident when looking at population density. Thirty-two percent of employed Americans living in urban areas teleworked in 2019, but only 22 percent of their counterparts in rural locales did so. While a small part of this gap is attributable to disparities in Internet use, most of the difference consisted of rural employees who used the Internet but did not work remotely.

Breaking out the employed population by occupation revealed some of the largest variations in telework. Some of these differences are unsurprising. Workers in scientific, legal, and finance fields were the most likely to telework. Over half of all employees in those categories reported that they worked remotely in 2019. At the other end of the spectrum were those who worked in transportation, agriculture, food preparation, manufacturing, and other fields where employees were both less likely to report teleworking and more likely than most to say they did not use the Internet at all (see Figure 2). 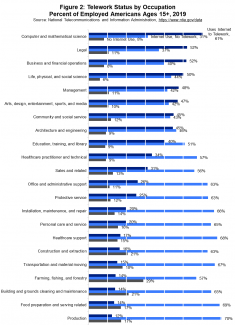 NTIA first asked about Internet users taking online classes in 2001. At that time, only 4 percent of Internet users ages 15 and older said they took classes or training online. Although that number stands at 20 percent as of 2019, there are some significant demographic differences in the rate at which Internet users take courses online.

We previously detailed the substantial demographic gaps in Internet use, but among those Americans who already had an Internet connection, there was little difference across racial or ethnic groups in the likelihood of taking online classes. However, there was a substantial gap based on educational attainment. While 27 percent of Internet-using college graduates and 22 percent of those with some college credit took online classes in 2019, only 10 percent of those with only a high school diploma and 14 percent of those lacking a high school diploma reported doing so.

NTIA will continue to analyze results from out November 2019 survey to better understand today’s connectivity challenges and how digital inclusion can help improve our nation’s resiliency. We also plan to continue to track metrics on remote work and learning in our next survey to gauge the impact of COVID-19 on these activities.

NTIA has been exploring the state of Internet use in America for over 25 years. Sign up for the Data Central mailing list to be notified as we continue our policy research in this area.