As consumer, industry, and government demand for 5G services and applications heats up, NTIA’s Institute for Telecommunication Sciences (ITS) is focused on finding ways to make the most efficient use of scarce spectrum resources. Many commercial providers have their eyes on so-called mid-band spectrum because it offers them the best combination of coverage, speed, and latency.  However, many U.S. government departments and agencies, including the Department of Defense (DoD), operate radar and communications platforms important to the nation’s national security and defense in those bands. A few week ago, the skies over Colorado played host to ITS experiments that will contribute to developing solutions to enable dynamic spectrum sharing between commercial and government users.

Over the course of two hours, a U.S. Air Force high-power radar plane, operating in the 3 GHz spectrum band, repeatedly flew past the Table Mountain Radio Quiet Zone Advanced Communications Test site near Boulder. On the ground, ITS researchers collected data that will begin to shed light on how 5G cellular services might dynamically share spectrum with DoD radar systems. The high-power radar platform provides long range air surveillance; understanding how these system might interact with thousands of terrestrial 5G receivers and transmitters on the ground is essential to the long term viability of 5G networks.  While the flight crew operated the radar system in a variety of modes, ITS engineers measured the radar signals reaching the ground. 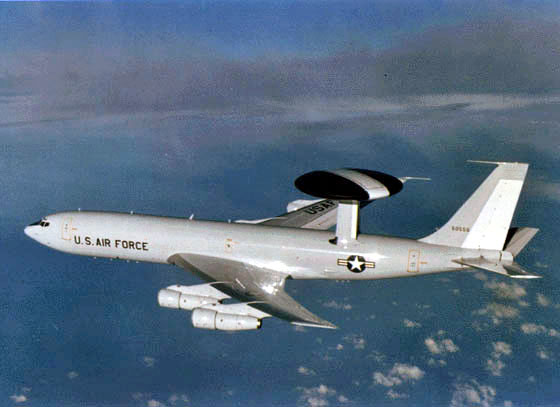 With these data in hand, ITS can begin simulating operation of these two systems, which will provide commercial and government decision-makers with an understanding of how best to ensure that both systems can effectively operate in a shared-spectrum environment. Importantly, the simulations will guide the next step in the project: developing sharing/coexistence system prototypes and evaluating their effectiveness with real-world, at-scale networks in controlled environments.

Some of the nation’s most important defense systems rely on radar. Radars work by aiming very short (think microseconds), very high-intensity (think billions of watts) bursts of radio waves, then listening for faint but discernible echoes (think billionths of a watt) with extremely sensitive receivers. Sharing spectrum between a regular communications system like cellular telephones or Wi-Fi and radars is difficult, because the strength of the outgoing radar signals can degrade or possibly even damage other systems, while the weak inbound radar echoes can easily be overcome by normal communications signals. ITS has worked with federal and commercial users to investigate solutions across many different spectrum bands since its founding.

Solutions, however, are system dependent. Engineers must customize them to work with the specific types of systems involved.  For example, in the early 2000s, engineers envisioned using a listen-before-transmit technology called dynamic frequency selection (DFS) to allow unlicensed wireless networking devices to use 5 GHz frequencies also used by radars. The earliest DFS deployments revealed significant issues requiring resolution because the radars in question supported safety-of-life missions for airport wind shear detection.  A decade later, DFS is an important part of wireless engineers’ toolkit.

ITS anticipates that the research with the Air Force will similarly lead to important solutions to enable dynamic spectrum sharing between Air Force airborne radars and 5G cellular services. As with prior sharing solutions, ITS will continue to provide the objective expertise and research engineering resources to help discover the answer in collaboration with all stakeholders.