Nearly everyone is familiar with the need to step outside a building to complete a wireless call. Modern building materials, such as aluminum, steel and even specially-coated window glass, significantly reduce or even block wireless signals

While it might be inconvenient for your average mobile device user, it could become a matter of life or death for an emergency first responder. Police officers and firefighters cannot stop what they are doing to leave a building in order to communicate during a time of crisis.

July 30, 2015 by Paige R. Atkins, Associate Administrator of the Office of Spectrum Management

In recent days, there has been a great deal of discussion about how much spectrum federal agencies use and whether that spectrum is being used efficiently. This is an important conversation to have and one that goes to the heart of NTIA’s statutory mission of fostering full and efficient use of the nation’s spectrum resources in a manner that most benefits the public interest. If we are to make progress toward a more efficient use of spectrum, it is also essential that this discussion include a full and balanced assessment of the challenges and trade-offs that must be addressed.

On Wednesday, President Obama travelled to Durant, Oklahoma, where he announced ConnectHome — a plan to bring high-speed broadband Internet to low-income housing in 27 cities and one Native American tribal community. ConnectHome is just one component of a broader Administration initiative to expand broadband and close the digital divide, and NTIA is playing a critical role in that effort.

Working to expand broadband access and adoption is a core mission of NTIA.  And for the past six years through our broadband grant program, we’ve been working with communities across the country to build high-speed networks in our most rural villages, set up computer labs in inner-city housing projects, teach critical digital literacy skills to people who may never have turned on a computer before, and so much more.

In Oklahoma where President Obama made his announcement, NTIA’s Broadband Technology Opportunity Program (BTOP) funded two infrastructure projects, built by Pine Telephone and the State of Oklahoma, which are playing an integral role in providing broadband to the Choctaw Nation. The projects are partners in the ConnectHome initiative to serve Choctaw public housing residences.

Unmanned aircraft systems (UAS) have the potential to provide a wide range of innovative and beneficial services to businesses and consumers in the United States. From enhancing news gathering, improving agribusiness, providing new delivery models, to providing Internet in remote areas, the possibilities for UAS are staggering.  Consumer trust and responsible operation are keys to fully tapping the transformative potential of unmanned aircraft.

Earlier this year, President Obama called on NTIA to launch a multistakeholder process to develop best practices that enhance privacy and promote transparent and accountable operation of UAS by commercial and private users. The end goal is best practices that mitigate consumer concerns while promoting growth and innovation in this exciting sector.

In April, we received more than 50 comments regarding the most pressing UAS issues and potential solutions. This input will be the basis of the group’s initial discussions.

Enhancing the Digital Economy Through Collaboration on Vulnerability Research Disclosure

Promoting and preserving the digital ecosystem is a core mission of the Department of Commerce, and the security and resiliency of that ecosystem is vital.  For the digital economy to thrive, users must trust that their personal data and the systems and websites they use every day are as secure as possible.

To help support this goal, the Department of Commerce announced in March an initiative to address key cybersecurity issues facing the digital economy that could be best addressed by a consensus-based multistakeholder process.  Based on input from a broad range of stakeholders, we are today announcing that the first cybersecurity multistakeholder process will launch in September and will focus on vulnerability research disclosure. The goal of this process will be to bring together security researchers, software vendors, and those interested in a more secure digital ecosystem to create common principles and best practices around the disclosure of and response to new security vulnerability information.

July 08, 2015 by Paige R. Atkins, Associate Administrator of the Office of Spectrum Management

Recognizing the growing importance of wireless broadband to the U.S. economy, President Obama five years ago last week set a bold new goal aimed at ensuring that enough spectrum is available to meet the surging demand for wireless connectivity. As the President noted in a June 28, 2010 memorandum, “The world is going wireless, and we must not fall behind.” The President called on NTIA and the Federal Communications Commission (FCC) to make 500 megahertz of federal and non-federal spectrum available for commercial wireless broadband by 2020. As we move into the second half of this ten-year challenge, I wanted to take the opportunity to review the progress we have made and the hurdles still left to surmount.

Five years out, there is little debate about the accuracy of the President’s prediction – the public’s demand for wireless “smart” devices has continued to grow exponentially along with the need for spectrum to help power this technology. Nearly two-thirds of Americans now own smart phones compared to just 35 percent in 2011, according to the Pew Research Center.

Laura Breeden has certainly made her mark on the digital world. While she describes herself as a “minor player,” Breeden, director of external affairs for the Office of Telecommunication and Information Applications’ Broadband USA program, has spent much of her career tracking the evolution of technology and the Internet.

Breeden’s work in this area began in 1983 when she joined BBN, a Cambridge, Mass., high-technology research and development firm. Her project, CSNET (the Computer Science Network), was funded by the National Science Foundation to connect university and corporate computer science departments around the country and the world via ARPANET, the platform that would eventually become the modern-day Internet. She helped link research networks in Japan, Korea, France, Ireland, Denmark, Great Britain, and Germany to their counterparts in the United States.

Today, the National Telecommunications and Information Administration (NTIA)  released an important technical report developed by engineers in NTIA’s Office of Spectrum Management (OSM) and Institute for Telecommunication Sciences (ITS) that provides the technical analysis supporting spectrum sharing in the 3550-3650 MHz band.  It serves as a concrete example of our efforts to make more spectrum available to meet the exploding demand for commercial wireless broadband while protecting mission-critical Federal systems.

The Federal Communications Commission (FCC) in April approved an innovative regulatory framework that would enable commercial access to 150 megahertz of spectrum in the 3.5 GHz band.  This framework grew out of NTIA’s 2010 Fast Track Report, which identified the 3.5 GHz band as a possible candidate for spectrum sharing to fulfill the President’s goal of identifying 500 megahertz of additional spectrum for commercial wireless broadband by 2020. Federal agencies are currently using this spectrum to operate military shipborne, ground-based, and airborne radar systems.

Stakeholder Proposals to Come Together at ICANN Meeting in Argentina

Next week, hundreds of members of the Internet stakeholder community will attend the Internet Corporation for Assigned Names and Numbers’ (ICANN) 53rd meeting in Argentina. As I head to Buenos Aires, one of NTIA’s top priorities continues to be the transition of NTIA’s role related to the Internet Domain Name System. Since we announced the IANA stewardship transition in March 2014, the response of the stakeholder community has been remarkable and inspiring. I thank everyone for their hard work.

The meeting in Buenos Aires will be pivotal, as the community finalizes the components of the transition proposal and determines what remains to be done. The three stakeholder groups planning the transition of the individual IANA functions have made great progress. I congratulate the Cross Community Working Group on Naming Related Functions for finishing its draft proposal and look forward to this work stream reaching closure. The other two stakeholder groups – the Internet Engineering Task Force, which is shepherding the protocol parameter proposal, and the five Regional Internet Registries, which collaborated on the numbering proposal – finished their proposals earlier this year. 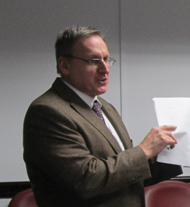 In addition to ensuring that federal agencies have the spectrum they need to carry out important missions for the American people, NTIA’s Office of Spectrum Management in recent years has been working hard to help meet the President’s goal of making 500 megahertz of spectrum available for wireless broadband by 2020.