Since 1994, NTIA has partnered with the U.S. Census Bureau to survey American households on their computer and Internet use, with questions that have been updated over time to reflect changing technologies and applications. We ask about locations of Internet use, devices people use to go online, the types of online activities in which they take part, their views on privacy and security, and why some do not use the Internet. The data provide substantial demographic information, including household income, education level, race, disability status, veteran status, and rural or urban residence.

Our most recent survey was conducted in July 2015, and the next survey will be conducted in mid-November 2017, with results available in spring 2018. Because NTIA’s survey is administered as a Supplement to the Current Population Survey (CPS), it benefits from that survey’s sophisticated methodology and large sample size—which includes roughly 53,000 households and 120,000 individuals. The CPS Computer and Internet Use Supplement is the most comprehensive survey of computer and Internet use in the U.S., including among the veteran population, and it serves as the main data source behind all of NTIA’s Digital Nation research. Our 2015 survey sample included 8,654 veterans.* Here are some top-level findings on veterans’ computer and Internet use:

For a more detailed look at veterans’ Internet use, NTIA could potentially merge its Digital Nation data with the CPS Veterans Supplement to examine how Internet use relates to periods of service, service-connected disabilities, and participation in certain veteran-specific educational or job-training programs. To learn more about veterans’ Internet use and see all of NTIA’s data and analysis about computer and Internet use in the U.S., visit the Data Central hub on NTIA’s website.

Figure 1: Internet Use at Any Location by Age Group and Veteran Status Percent of U.S. Civilians Ages 17+, 2015 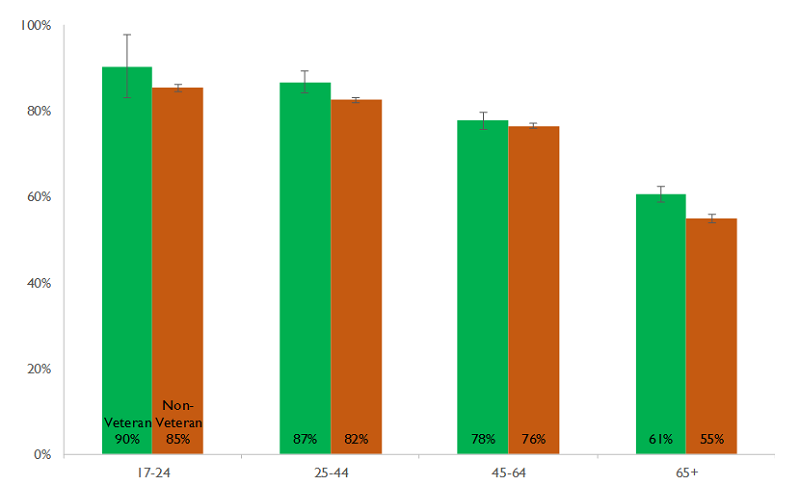 * The CPS identifies veterans as anyone who answers yes to the question “Did you ever serve on active duty in the U.S. armed forces?” This suggests that anyone who has completed basic military training would be considered a veteran. Since those currently on active duty are excluded from the CPS, they are not included in the results of the survey.