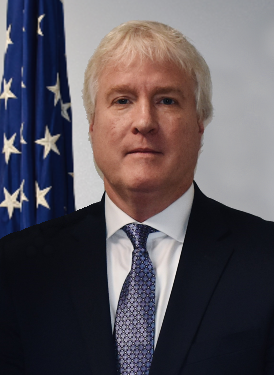 Doug Kinkoph is Acting Deputy Assistant Secretary of Commerce for Communications and Information. Kinkoph joined the Department of Commerce in 2010 and has served in a number of roles, working on issues including spectrum management, broadband, and public safety communications.

While serving as head of the Office of Telecommunications and Applications, Kinkoph created the agency’s BroadbandUSA program, which works to promote broadband deployment and adoption across communities nationwide. He also oversaw a $4 billion broadband grant program that funded the deployment of broadband infrastructure, public computer centers, sustainable adoption of broadband service, and statewide broadband planning.

Before joining the Department of Commerce, Kinkoph held multiple executive roles in the communications industry as well as in the public and private sectors as a telecommunications policy expert. He served as Vice President of Operations at Soundpath Conferencing where he was responsible for all sales, marketing, and customer service operations. His private sector experience also includes serving in senior regulatory and policy roles at XO Communications, Nextlink, and LCI.

Kinkoph earned his M.A. in Administration from Central Michigan University and his B.S. in Telecommunication Management from Ohio University.