WASHINGTON – The Department of Commerce's National Telecommunications and Information Administration (NTIA) today released a new report taking a first look at data collected through the Internet Usage Survey of more than 50,000 households, commissioned by NTIA and conducted by the U.S. Census Bureau in October 2009. Since 2007, the data show that while virtually all demographic groups have experienced rising broadband Internet access adoption at home, historic disparities among particular demographic groups overall continue to persist.

"Broadband Internet access is critical to creating jobs in America, improving our global competitiveness, and enhancing our quality of life," said Assistant Secretary for Communications and Information and NTIA Administrator Lawrence E. Strickling. :While it is encouraging that Americans across virtually all demographic groups and geographic areas are using broadband at higher rates than ever before, a significant portion of the population is still not online. Through Recovery Act funding and other initiatives, the Obama Administration is working to close this gap and help create economic opportunities for more Americans. The survey data we are making available can not only inform these efforts, but it also can be useful to the broader research community working to address the digital divide."

A full copy of the report is available at: http://www.ntia.doc.gov/report/2010/digital-nation-21st-century-americas-progress-towards-universal-broadband-internet-acces 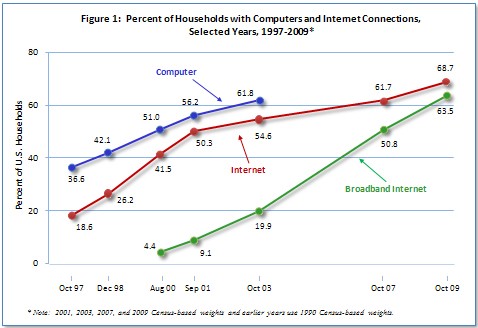