Exploring the Digital Nation - Computer and Internet Use at Home 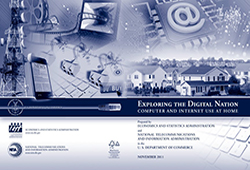 The Department of Commerce's Economics and Statistics Administration (ESA) and National Telecommunications and Information Administration (NTIA) released a report, “Exploring the Digital Nation,” that analyzes broadband Internet adoption in the United States.  Overall, approximately seven out of ten households in the United States subscribe to broadband service. The report finds a strong correlation between broadband adoption and socio-economic factors, such as income and education, but says these differences do not explain the entire broadband adoption gap that exists along racial, ethnic, and geographic lines. Even after accounting for socio-economic differences, certain minority and rural households still lag in broadband adoption.

The report analyzes data collected through an Internet Use supplement to the Current Population Survey (CPS) of about 54,300 households conducted by the U.S. Census Bureau in October 2010.  Earlier this year, NTIA released initial findings from the survey, showing that while virtually all demographic groups have increased adoption of broadband Internet at home since the prior year, historic disparities among demographic groups remain. This report presents broadband adoption statistics after adjusting for various socio-economic differences.

(NOTE:  If not printing in color, select the "grayscale" printer setting to ensure graphics clarity.)

Exploring The Digital Nation - Computer and Internet Use at Home